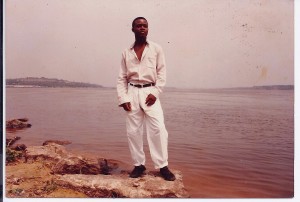 Joseph Mbungu Nsiesi Is Waking up Young Americans
By: NFDPC
In: World

Joseph Mbungu Nsiesi, author of A Compass of Faith: A Man’s Journey To America, is waking up young Americans across the country. Much of the public will walk across a busy intersection everyday and pass by at least 10 strangers. Humans are infamous for being humans. One individual can scan over 10 other individuals to conclude who each might or might not be within a matter of seconds. Every man has his or her story. Some stories unbelievably a dream while others are unbelievably far from a dream. If given the opportunity to read a biography on 10 strangers, many would discover their initial conclusion was far from the actual truth. Joseph Mbungu Nsiesi’s story is not one that a person with even the most creative imagination would ever perceive to be reality for any man he passes by on the street.

Nsiesi, 45, is a husband, Father, activist, and a respected registered nurse at Kaiser Permanente Hospital in Los Angeles, California. For many young Americans with a passion to become RNs, the blueprint to get there may seem cut and dry – attend high school, nursing school, and then take the state board exam to receive their license in nursing. For Joseph Mbungu Nsiesi, the road to his passion and building a family wasn’t so clear. Matter of fact, the road did not exist for him to arrive to any destination.

Born in 1969 in Democratic Republic Congo (formerly known as Zaire), Nsiesi grew up during a time when going to school to get an education was a blessing that he did not take for granted. He graduated high school receiving a national diploma in business. His family and friends had high hopes for Nsiesi, as he couldn’t wait to further his studies in a university. Unfortunately, he faced much corruption and violence to attend class. He had to wake every morning at 4AM to fight for a seat on the bus to get to the university in his country that was miles away. After arriving, Nsiesi had to bribe officials to assure a seat in class everyday that was not promised. Students traveled far in hopes of getting into a classroom. Many found themselves sitting outside of a classroom sadly disappointed day to day. Nsiesi had to constantly look over his shoulder to avoid encounters with thieves on campus waiting to rob him of his money. The only obstacle many young Americans face in attending a university in the United States after the tuition check or financial aid has cleared is merely getting their assignments in on time. Even if covering tuition poses a problem at a major university, a student in the United States has the option of attending a less expensive college or enrolling in a community college to take general studies in the interim of saving up to attend a major university. And once the tuition is taken care of, the only other obstacle is making sure they don’t party too hard.

Everyday for eight months Nsiesi was in survival mode to get an education as well as saving his life.  He decided to join the family business to help bring income to his family. Nsiesi definitely did not grow up in the happy, successful Huxtable family structure from the hit television series The Cosby Show or even what has become the norm for most children – a single parent household. Either would have been ideal for Joseph Nsiesi. He was separated from his siblings when his mother passed away and his father sent him to live with his uncle and aunts at a very young age. The painful hand that was dealt him at the age of seven was forced, accepted and not to be questioned in his culture. Nsiesi just knew he wanted to make money to live and provide a comfortable life for himself, his girlfriend Nenette, and his family some day. The only thing in his way was how he was going to make this happen.

The family business took a turn for the worst over night as robbers and vandals destroyed the family business robbing them of everything. There was no coming back to rebuild as the government and authorities were just as corrupt as the criminals. For any man to watch his family go hungry, Nsiesi grew angry, restless, and was proactive for change. He joined political activists to take action to which sparked his own country’s government to put his name on a hit list. Soldiers came searching for those demanding justice in their country. Each day Nsiesi took risks going out to make money the best way he could to feed his family by selling gas and other items.

Nsiesi was faced with a decision that most young men his age never have to face, unless they live in gang infested areas in inner cities of the United States. Most men in their 20s are starting careers and discovering the world. They are far removed from even the realities of young men and women across town in the United States facing death everyday much less young people in other countries. Nsiesi had to decide whether it was safe for his family and his love Nenette for him to remain in the home or leave in hopes of building a better life for his family. Waking up to the possibility of death everyday by the hands of his own government, he felt he had no choice. He looked to the Congo River that he once viewed as overwhelming and frightening. Against the wishes of his uncles, aunts, and Nenette and spiritually torn between leaving those he loved, he got on a boat (baleniere) headed up the Congo River. His journey on the river was either going to sail him to hope or lead him to his imminent death.

Once Nsiesi made it onto the overly crowded boat and gained distance from his hometown, he began to feel the possibilities and freedom. But life made sure he did not get too comfortable. Death crept in as it took the life of his traveling friend lying next to him on the boat. Nsiesi himself took on the same symptoms that had taken his friend. He knew it was just a matter of days before he would die on the river from the mysterious illness as well. But one thing Nsiesi held onto more than food and water, it was his faith in God. As many were dehydrated and starving on the journey to hope, he talked to God to feed his soul. Bleeding and in excruciating pain, he held onto his Bible. The will of God overpowered his physical and saw him through a month long journey on a river that was his only way out. Nsiesi finally arrived in Mbandaka exhausted and still very ill, but the fight and journey was far from over. He encountered more thieves and corruption from his own people (Christians and Muslims) as he got settled to start a new life, but his faith in God kept him moving forward when most would have given up.

Finally, the sun began to shine in his favor as he was issued a passport to America. But even then, he encountered racism to the point where he wasn’t going to be allowed on the plane to the United States because of the color of his skin. At this point in book, most would cry from exhaustion and defeat for Joseph Mbungu Nsiesi. How many more beatings could this man take is what many would ask themselves. Life kept punching him, but Nsiesi kept getting up and moving forward. He took gut punch after gut punch, but he kept going. With nothing to lose in the airport, as the airline employees would not allow him onto the plane, he began to explode by taking off his clothes. They saw the passion, pain, and rage in his eyes and stopped the plane from closing its doors. He fought for hope. He fought for a future.

Nsiesi made it to America and did not take his access to education for granted. After witnessing his good friend die and having to nurse himself back to health from the same fatal disease, Nsiesi immediately went into nursing excelling in providing care for the sick. And because many are still suffering in the Congo due to lack of healthcare, he has started an organization (The Nsiesi’s Foundation for Disease Prevention in the Congo) that gives medical advice to save lives globally. Building a beautiful life in Los Angeles, California with his wife Nenette and providing an example of success to their children, many would look at Joseph Mbungu Nsiesi and think he was a young African man from privilege and conclude life has been quite good to him. For anyone who has sat down to coffee with this man has walked away in awe of his strength, passion, and appreciation for the Congo and for America.

Joseph Mbungu Nsiesi is waking up young Americans. Many parents should have their American teenagers read A Compass of Faith: A Man’s Journey To America . Their teen will walk away appreciating every morning waking up to face life and not death. They will wake up not taking school for granted. They will wake up understanding how powerful hope is. They will wake up wanting to contribute to their community and their country. And, more importantly, they will wake up each day thanking God.

The main office in The D. R. Congo: